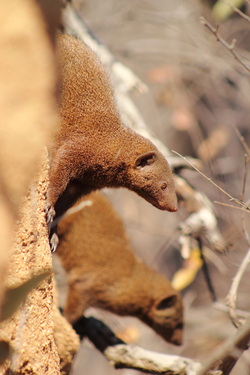 Dwarf mongooses live in cohesive groups of three to 30 individuals, consisting of a dominant pair, generally the oldest individuals, and several subordinate helpers of both sexes, both related individuals and unrelated immigrants. Whilst most adults of both sexes mate during periods of synchronised oestrus, the dominant pair are the only group members guaranteed to reproduce. Although both sexes emigrate, males are twice as likely to do so; consequently over three quarters of group females are natal individuals, in contrast with only one third of males.

All adults take part in cooperative activities such as babysitting, territory defence, sentinel duty and allogrooming . Helpers are known to have a positive influence on reproductive success, with group size directly influencing pup survival and growth rate.
All adults contribute to pup care by guarding the den, provisioning pups, and in the case of some subordinate females, lactating and suckling young. Subordinate females shoulder the vast majority of the energetic burden of lactation, with 12% of subordinate females becoming pregnant each year. Their pups, however, rarely survive, either due to early abortion or infanticide by the dominant female.
Similarly to the other social mongooses, dwarf mongooses are diurnal, typically emerging from refuges in the early morning and retiring at dusk, foraging during the daylight hours. While foraging, group members dig for prey, primarily invertebrates. Foragers are unable to search for food and be vigilant simultaneously, and a sentinel is often posted. Dwarf mongooses are vulnerable to a wide variety of terrestrial and aerial predators. They have a well-developed vocabulary of alarm calls which not only signify ‘danger’ but also indicate the type of predator and urgency of the threat, and also respond to the alarm calls of a number of heterospecific species such as hornbills, fork-tailed drongos and tree squirrels.
Powered by